On Sunday 17 March we caught the 7.15am boat from Drake Bay back to Sierpe – the entire operation is such a well coordinated service! We have nothing but praise! All the accommodation operators book their passengers onto the ferry the day before so they know whether one or two ferries are required. Young men greet you at the beach and carry luggage onto the boat, and store the bags in the luggage hold. Once in Siepre we caught a taxi ‘collectivo’ to Palma Norte arriving at 8.55am. The bus to San Jose was waiting for the collectivo and any other taxis to arrive, then it departed at 9am. All so smooth! It makes travelling in Costa Rica easy. Well, this has certainly been our experience so far.

The bus travelled up the west coast by the Pacific Ocean for quite a while – as it was Sunday many people were enjoying a day at the beach. Then it headed inland to San Jose.

We had booked a couple of nights at Hotel Casa Ridgeway – a delightful unimposing Quaker establishment in Central San Jose. No smoking, no drinking, quiet basic rooms generally without an ensuite, suiting budget travellers, but certainly adequate. A couple of lounge rooms, lots of peace and activist posters and artworks, an extremely large library devoted to peace movements and important people who have contributed throughout the ages, and a kitchen to boot! And importantly, helpful caring staff. Our room was the Aung San Suu Kyi room – as her reputation is now tarnished due to the Rohinga crisis over the past few years, we thought perhaps that room could be renamed. We tried to book our room via their webpage contact form, and then email. Unfortunately no response. We then used booking.com and secured our room. Staff said it’s best to phone when booking a room. (I never did really understand why this was the case).

Above: Poster at Hotel Casa Ridgeway

Our next destination was Orosi, south-west of San Jose. In San Jose we walked from Hotel Casa Ridgeway to the bus station a few blocks away and caught a bus to Cartago at 8.40am. The journey was only forty minutes approximately. Cartago was struck by earthquakes in 1723, 1822, 1841 and most recently 1910. Accordingly it has been rebuilt, in a rather utilitarian fashion without much consideration for aesthetics. Substance over style.

Please forgive me if I indulge myself briefly and discuss earthquakes. I became curious as to how frequently Costa Rica experiences tremors and earthquakes. A quick Google search reveals a wealth of information from various sites regarding current tremors and quakes. We have not felt any tremors – probably sleeping far to soundly due to all the walking every day! Here is a screenshot from volconadiscovery.com 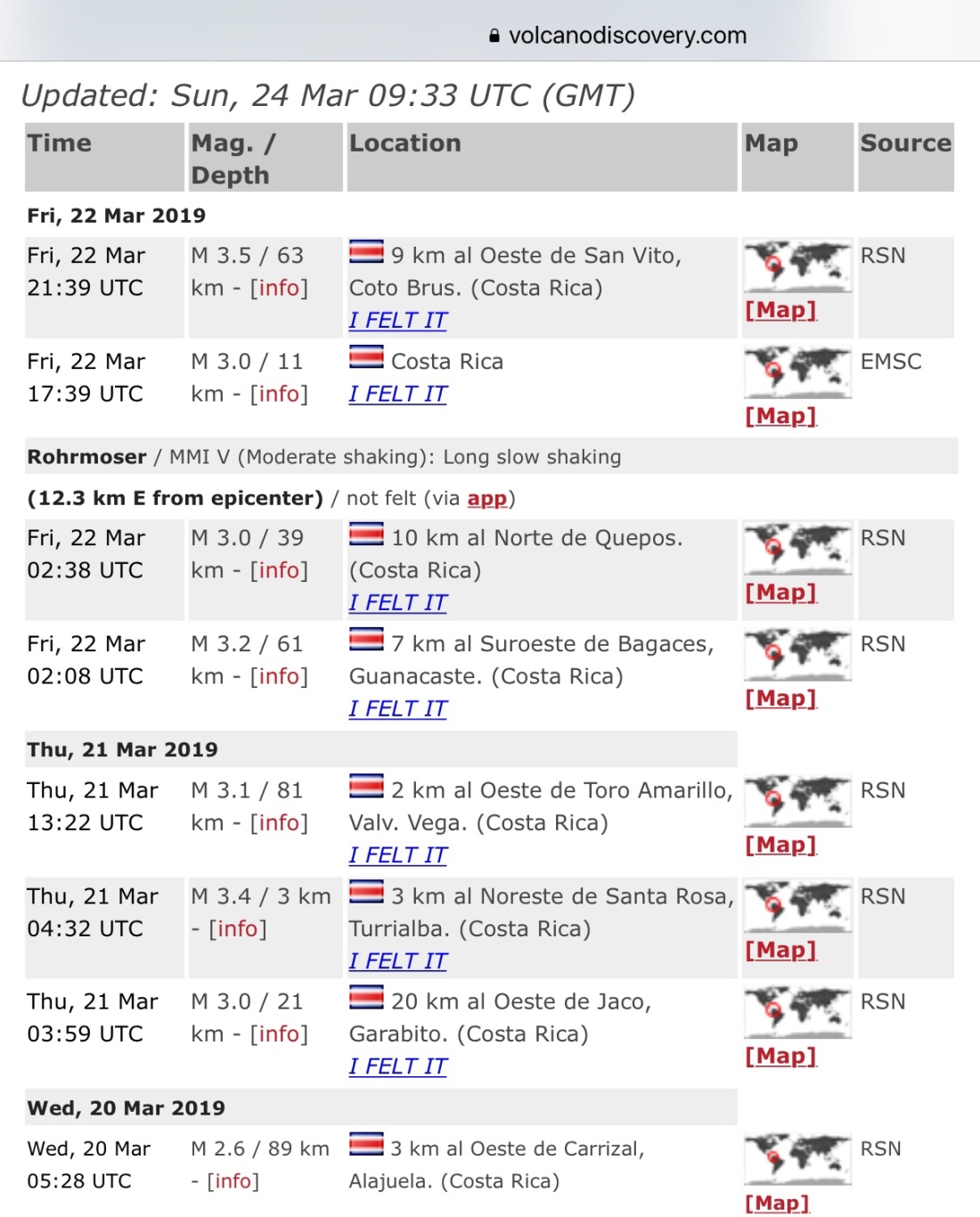 We misunderstood where the bus departed for Orosi, so we walked around town for about half an hour trying to locate the bus stop. Well, the benefit was seeing other parts of the town and walking through a square called Las Ruinas. A few extremely old trees graced one corner of this square, and one could just imagine how magnificent the town must have been before the various earthquakes. Finally I asked a local in my broken Spanish where the bus stop was – we were only a block away!

Above: These coin trays are in every bus.

Our bus wound its way down into The Orosi Valley – home to numerous small market gardens and coffee farms. Orosi, situated at 1,068 metres, is surrounded by high mountains, and heavy mists came and went frequently. This little township was a haven from the heat. Our ‘home’ for three nights was Montana Linda Guesthouse – three upstairs rooms each with an ensuite, a kitchen, dining area and lounge room downstairs. Plus the guesthouse black cat that I immediately bonded with.

The Orosi church was built in 1743 by the Spaniards, and is one of the oldest religious sites still in use today. Many have been ruined by earthquakes. The roof is a combination of thatch and ceramic tiles. I recognised the distinctive gentle curved shape as similar to old tiles we had seen in Paraguay a few years prior. It was explained to us that tiles were thus shaped by laying pieces of clay over workers’ thighs to create the distinctive shape. 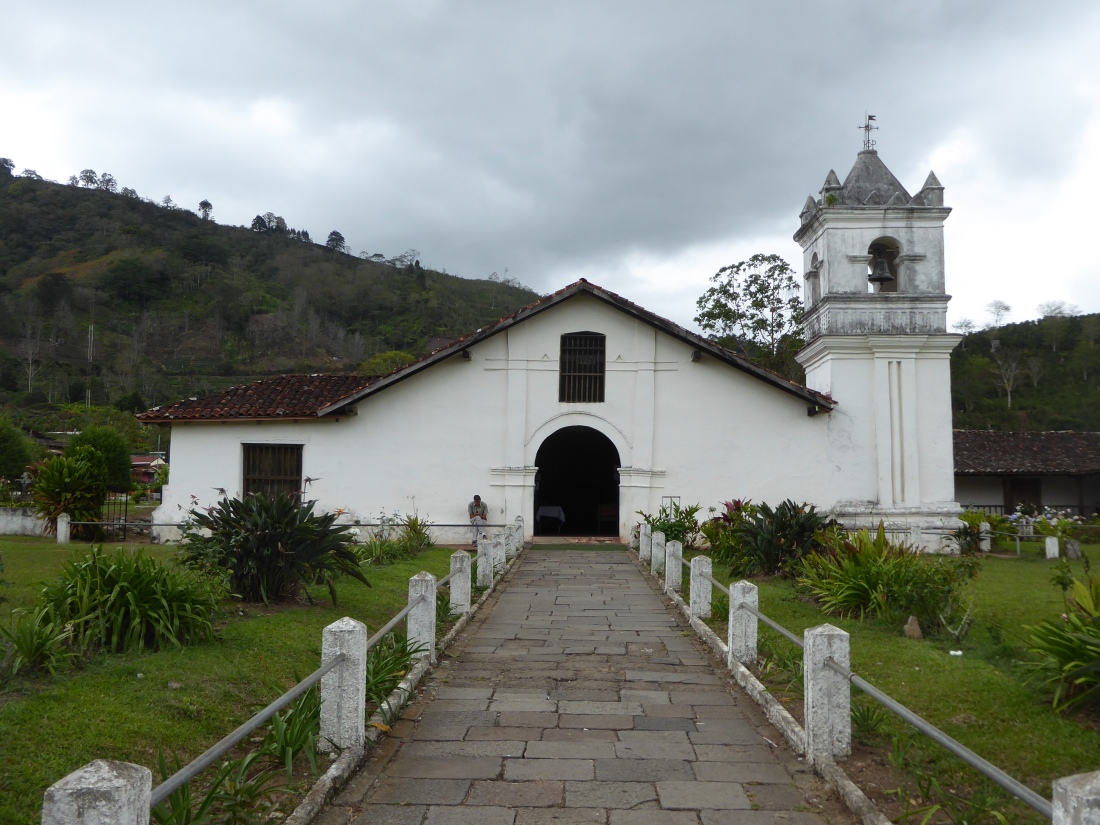 Above: Orosi church – interior, looking outside.

Tapanti National Park, approximately fifteen kilometres from Orosi at a guess, receives the highest annual rainfall of all locations in Costa Rica. We would have liked to visit the national park, but without a car it was impossible.

Therefore we decided to birdwatch along the road to Tapanti – good ‘open corridors’. Two mornings we caught the bus from Orosi to Rio Macho, then a bus from Rio Macho to the small village of Purisil. The bus ended there. On the first morning we walked the road towards Tapanti. Initially we were walking in a fine mist – one of those mists that does not make your clothes damp. However, as we climbed slowly higher, the mist turned to a light shower causing us to use our umbrella.

Above: Bridge on the way to Tapantí National Park. As we walked towards Tapantí, the weather became more inclement. 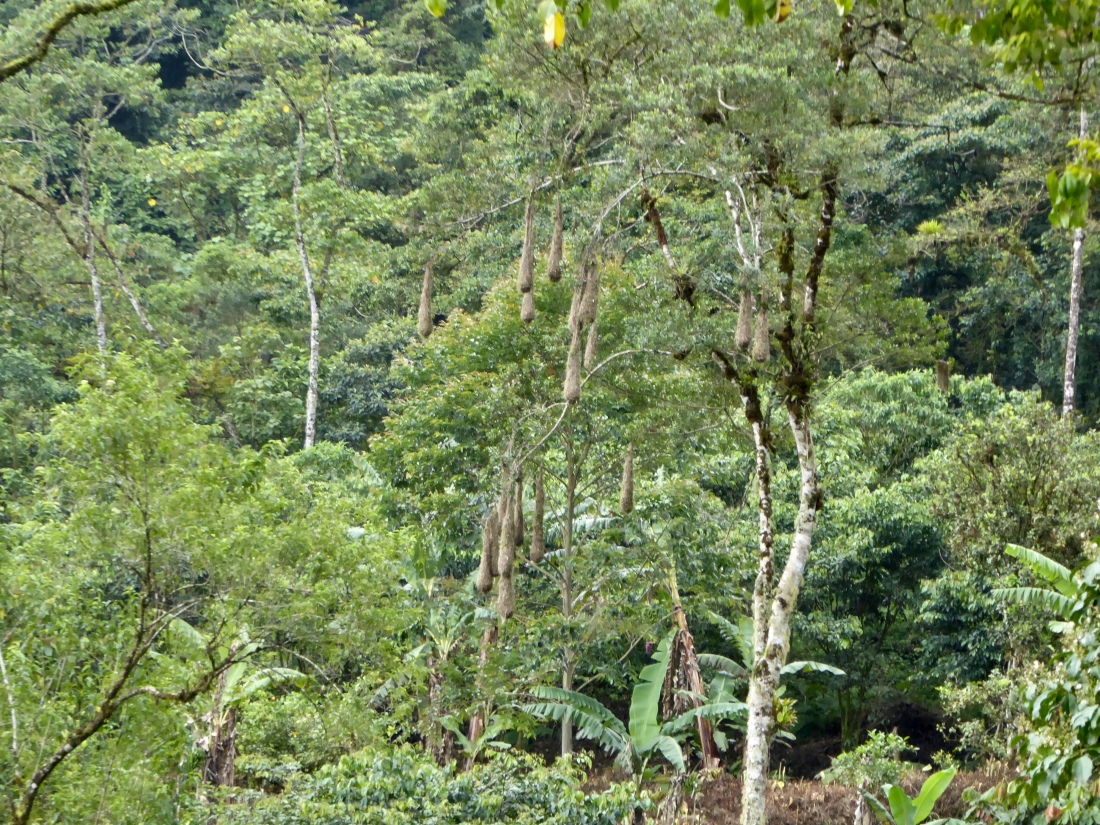 We walked back to Purisil and sat under a shelter waiting for the 12.05pm bus to Orosi. A couple of young men approached us, and for the first time during this trip, one of them wanted to have his photo taken with us. I thought this a bit odd, but we obliged. (Being photographed with, or by locals when in Indonesia in 2018 was a common occurrence).

Well, the following morning, when we alighted the bus at Rio Macho and waited for the bus to Purisil, the same young man was also waiting for the bus. We got to talking, and he told us he was learning English using Duolingo. We could certainly relate to Duolingo as we had been using this app in our attempts to learn Spanish – we shared some laughs about this. However he said he could not afford English lessons. Together we alighted the bus in Purisli, and this time we had decided to walk the road to the trout farms. He headed off on the same road, us dawdling along bird watching.

A little later we came across this cemetery. None of the gravestones had names or dates.

And further along the road we once again met the young man. Turns out his name is Guayner, and together with his girlfriend Zayra they were farming this land. He was delighted to show us around. He had a large crop of lettuce – the variety we call ‘butter lettuce’ in Australia. I explained this name and he seemed very puzzled that a lettuce could be called such – perhaps the meaning was lost in my poor translation.

Above: From left to right: Guayner, John and Zayra

We continued up along the road and looked down onto a rather picturesque trout farm surrounded by manicured gardens with cultivated hydrangeas. A truck rumbled by slowly. On we went until the road ended at another trout farm. We stood in the clearing before the entrance, bird watching. A man came out and invited us in, advising there were waterfalls to see and trout for sale. We politely declined both. We could see a group of men catching trout and putting them into large containers of water on the back of the truck. A little later on, the truck rumbled by slowly, a young man standing on the back of the truck supervising the trout in the containers. Every time the truck lurched on this very rough road water splashed out. The young man had a hose and appeared to be blowing air into the main container to aerate it. He was definitely going to be quite wet by the journey’s end.

Once again we waited for the 12.05 bus to Orosi – the next one was three hours later and there were no cafes or restaurants in this small village. Swallow-tailed Kites were gliding the thermals.

On our last evening we heard the beating of drums coming from somewhere near the Orosi church. Then trumpets playing, albeit often not in tune together. I stood on our balcony with my binoculars and could see the procession slowing walking up our street. Numerous people with drums and trumpets – and they were carrying a tall statue of Christ. Our neighbour in the next room – who was taking Spanish lessons in the Orosi village – said she thought it was a name day celebration.

Our next destination is Cahuita, Costa Rica, on the Caribbean coast.

View all posts by kolvic12